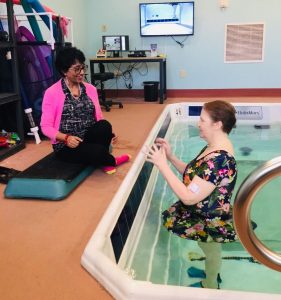 Osteoarthritis is the most common form of arthritis and it impacts millions of people throughout the world. This form of arthritis primarily affects the aging population. A major symptom of the condition is pain that is caused by the breakdown of protective cartilage in joints such as the hips, knees, hands and spine. Several research studies show that aquatic therapy can be used to treat patients suffering from this condition in a way that is both comfortable and effective.

The Sunday Observer recently interviewed a Sri Lankan doctor who discussed how patients find aquatic therapy to be less painful than land-based therapy because of buoyancy, which is simply the ability to float in the water. Buoyancy is important because patients who are in waist-deep water are 50% unweighted and patients who are in neck-deep water are 90% unweighted. Utilizing aquatic therapy when treating arthritic patients has been beneficial because the patients experience an increased range of motion, decreased swelling and tenderness, and a reduction in the risk of falling.

The Sri Lankan doctor also stated that the main symptoms of osteoarthritis are pain during or after joint movement, tenderness, stiffness or decreased range of motion and loss of flexibility, among many other things. This is congruent with other osteoarthritis research we have seen. Two research studies done by two teams of researchers at Utah State University echo these findings. A study done by the Utah State PE and Recreation Department found that patients reported pain levels that were 140% greater during land-based exercise sessions than during aquatic therapy exercise sessions. A second study done by a different team of researchers at Utah State University found that perceived pain was 100% greater following land exercise than aquatic treadmill exercise.

The article in the Sunday Observer also referenced that obese individuals have a higher risk of developing osteoarthritis. A team of researchers from Texas A&M University conducted a study that found an underwater treadmill as a viable alternative to a traditional land-based treadmill for overweight individuals. During this study, individuals gained more lean body mass and saw a reduction in body mass index (BMI), percent body fat, and waist-to-hip ratio. The underwater treadmill also offers a treatment environment where a lower risk of pain and injury exists.

Multiple sources have shown that osteoarthritic patients have responded positively to aquatic therapy treatment programs and it is a viable treatment method that is both comfortable and effective for individuals who suffer from this condition.