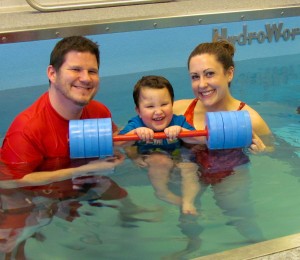 On December 3, 2015, we hosted a webinar titled, “Innovative Co-Treatment Therapy Combining Physical and Speech Therapies in an Aquatic Environment.” In this webinar, Timothy Williams, PT, DPT, Physical Therapist and Ambyr Henderson, MS, CCC-SLP, Speech and Language Pathologist at Pullman Regional Hospital, located in Pullman, WA presented on the topic of combining physical and speech therapy in the water for a young boy with a brain tumor.

This webinar was packed full of great ideas for engaging pediatric patients in the water. Tim and Ambyr began by introducing this 3 1/2 year old boy, Jackson, via a video describing his diagnosis, his initial evaluation and how they came to putting Jackson in the water. They reviewed the innovative pool toys that they use and the different activities used to incorporate both speech and physical therapy. One main focus of this specific rehabilitation was encouraging Jackson to use vocalization that matched his movements such as:

After their initial combined session, they noticed that he was much more engaged with the activities in the pool and more animated. They found that they got increased participation from him and interest in the therapy as well as increased vocal intensity. The water not only helps him do movements more easily but it’s also more challenging with the natural viscosity of the water, the use of jets and increased sensory inputs.

Currently, Jackson receives one pool session and one land session every other week, and two land sessions the alternating weeks. Some of the results they have seen impact both speech and physical therapy.

An unintended but beneficial consequence is that both Tim and Ambyr are learning how physical therapy strategies can be incorporated into speech treatment and vice versa, meaning Jackson is getting added benefits in his land therapy sessions as well.

Tim and Ambyr have a few theories about why this co-treatment is working so well in the pool:

They have also tried some of their techniques with group therapy during the summer and are looking forward to doing it again next summer because they saw great results from that as well. In this case, they created stations in the water where three children rotated among three therapists with different focuses such as kicking, speech or jumping. The parents were thrilled with the therapy because they were able to interact with other parents with similar stories, and their kids were enjoying a “normal” summer activity in which they might not typically participate. They also got referrals from speech therapy patients to physical therapy and vice versa. The kids loved it because of the social aspect and “fun” of the water and the therapists saw progress in all disciplines.

Tim and Ambyr would like to continue using these co-treatment techniques in the future while also incorporating some strict research methods so that others can learn from their results. They are looking to increase their group aquatic therapy offerings, add occupational therapy and include a more diverse patient mix such as adding autism spectrum disorders, down syndrome and more.

The webinar was extremely informative with a lot of take-aways and practical ideas that could be implemented immediately for those working with children in the water. Because it was so engaging, it also garnered a lot of great questions. A few of them are reviewed below:

Tim and Ambyr are doing some awesome, innovative therapies in Pullman, WA and we are thankful that they shared their successes with us. Watch the full webinar on-demand>>