Smashing helmets, ridiculous side tackles, plates of wings piled high and terrible refs. Yes is it football season. It is already week four of the NFL season and competition is rising, heated discussions are happening, the referees are making terrible judgement calls and fantasy leagues are the topic of conversation. That being said, unfortunately there are a number of players injured and currently working through some physical therapy and rehab in order to get back on the field as quickly as possible. 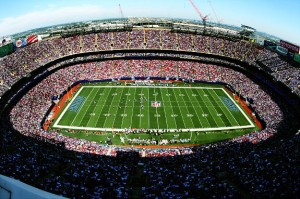 Football players are on and off the disabled list quite frequently, it’s just the nature of the game, therefore the following list is not comprehensive but their teams are all loyal HydroWorx customers. Aquatic therapy is a great option for athletes trying to come back as quickly as possible from an injury. The buoyancy of the water can take up to 80-90% of the players weight off, allowing them to stay mobile and perform exercises sooner than they would be able to on land. Incorporating the underwater treadmill with aquatic exercises and then  land- based strength training will yield the best results for these high caliber athletes. Adrian Peterson, the Viking’s star running back made use of the HydroWorx aquatic therapy pool after undergoing reconstructive knee surgery and recovered just as strong if not stronger. Peterson had knee surgery last December (2011) and was able to start in the Vikings 2012 season opener. Below are a list of some current NFL injuries that are perfect candidates for HydroWorx rehab:

“I’ve been preparing like I’m going to play this week,” Amukamara said. “I’ve been in the meetings and I’ve been in the lineup [taking reps with the starters at practice]. Those are all good signs to me.”

Football injuries are not to be taken lightly, especially when your team is depending that player or your fantasy team needs them to return. That is why these injuries would be well-served with aquatic therapy to get back out on the field as soon as they can. To stay up to speed on all your NFL news and the schedules visit here. Stay tuned for more NFL updates in the next few weeks!