For three weeks each spring, the nation is in a basketball frenzy as millions tune in to watch the NCAA March Madness tournament and follow their favorite teams. While upsets and buzzer beaters dominate headline space, one or two lines about a player’s injury could threaten to bust a fan’s bracket. A ruined bracket thanks to injury is disappointing for fans, but missing or potentially losing a game in the tournament is devastating to the athlete. While fans enjoy watching these athletes compete, the players are working hard to prepare both mentally and physically for games that are often on consecutive days with limited rest and recovery time. 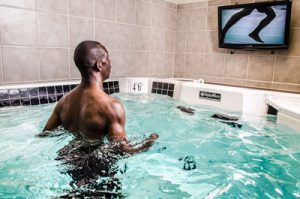 During a regular collegiate season, a player might be able to afford a few days for recovery, however securing a ticket to the Big Dance sometimes means playing a game on only a single day’s rest after the previous game. Not allowing adequate time for the body to recover or skipping recover tactics may increase the risk of muscle strains and related injuries.

From the first tipoff, sixty-right Division I teams set off on a marathon of athletics, in hopes of being the last standing on April 3. To prepare for high-intensity play with minimal time to rest, athletes pay attention to each signal their bodies send. Following a game, players typically head directly to the athletic training room for a massage and stretching of the upper and lower extremities. When available, players usually partake in water therapy, shifting from a warm water pool to an ice bath or cold tub.

According to the Institute of Integrative Healthcare Studies, the use of contrasting temperatures, known as contrast therapy, has been used as a healing tool for thousands of years. The contrast between heat and cold is believed to exert a physiological effect on the body’s pain mechanism.

The key to keeping players on the court is to keep soreness to a minimum while enhancing muscle recovery which can be accomplished with aquatic therapy. Athletes also notice better outcomes by utilizing active recovery in the water rather than passive recovery during breaks from intense training sessions. This allows them to keep the muscles moving as they heal from exercise induced tears. Water therapy has be shown to give athletes an edge by performing recovery exercises in the pool to actively flush the body, add additional caloric ‘burn’ to the weekly microcycle and incorporate joint motion in deloaded states.

If you work with athletes, it’s worth considering aquatic therapy as a recovery and regeneration tool beyond just rehab. Learn more about the positive outcomes of aquatic therapy here for your athletes.