Over the next few weeks we would like to share the expanded story of each nominee of the 2015 Healthcare Excellence in Aquatics Award. The nominees will be introduced in alphabetical order. 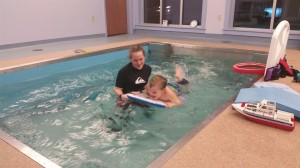 Our first nominee is: Leg Up Farm for Helping a Pediatric Patient with Spinal Muscular Atrophy Reach His Goals

Tyler, a 9 year old boy, with Spinal Muscular Atrophy has recently been benefiting from aquatic therapy at Leg Up Farm in the HydroWorx 2000 Series pool.

As a result of his Spinal Muscular Atrophy, Tyler had experienced decreased strength and endurance, abnormality of gait along with other limitations. He had difficulty getting in and out of chairs and was unable to jump more than a few inches. He has had to wear orthotics, an abdominal binder and a leg abduction brace to keep his legs in proper alignment.

Tyler had been working in the land physical therapy setting at Leg Up Farm for 2 ½ years before aquatic therapy was added to the facility. Over the course of his entire life, he has learned to compensate for his weaknesses and limitations in various ways. Although he could do the tasks in his physical therapy sessions, he grew increasingly frustrated that they remained difficult and lost interest in completing the exercises. However, through therapy at Leg Up Farm, Tyler has been working on breaking down those barriers by strengthening other muscles.  For example, he taught himself how to get out of a chair by using his hands and pushing up into standing.

In December of 2013, aquatic therapy was added to Leg Up Farm and Tyler was one of the first patients to receive this service. Since beginning his aquatic therapy sessions, Tyler has a renewed confidence, increased gross motor function, improved body coordination and strength and agility scores.

Improving his abilities was a huge feat considering the challenges he had on land, but helping him reach his personal goal was even more rewarding. The one thing that he wanted was to be able to boogie board with his siblings during their yearly summer vacation to the beach. Thanks to the ingenuity of his physical therapist, he was able to reach that goal.

His physical therapist, Dr. Amy Arruda, was inspired by Tyler’s summer vacation goal. She used trial and error to devise a protocol that involved turning one resistance jet onto 100% and the other to a lower percentage (which gradually increased to 45%). With the pool set up in this way, Tyler would hold a boogie board and kick his way forward against the lower percentage jet and then turn around and “ride” the stronger jet to the back of the pool. Simulating the activity of boogie boarding made the strengthening activity fun and perfectly relevant to his goals.

Leg Up Farm, a pediatric therapy provider, continues to think outside-the-box in efforts to be innovative and creative in their approach with children. Their goal is to make therapy fun so that it seems like play, as opposed to work. And in Tyler’s case, that goal was achieved.

“Without the HydroWorx pool, this client would have struggled to achieve his personal goal of boogie boarding with his family and would likely not have made the physical gains witnessed this past year.”

Summer vacation is now long gone, but Tyler still requests that activity during his therapy sessions!