Over the next three weeks we would like to share the expanded story about each nominee of the 2014 Excellence in Aquatics Award. The nominees will be introduced by alphabetical order.

Our first nominee is: Coastal Carolina’s Barry Lippman, MS, ATC, NASM-PES, for the Shoulder Rehabilitation of a Division 1 Second Baseman

This second baseman arrived at Coastal Carolina in August of 2012 as a transfer with severe atrophy and weakness in his right shoulder. Due to the concern of further damaging the shoulder through off season lifting, Barry Lippman, Associate Athletic Trainer and Rehab Coordinator, and team decided to utilize aquatic therapy for the athlete’s off season strengthening program. 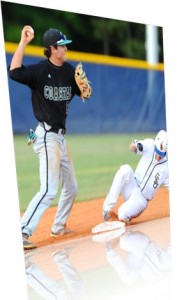 After the season, the athlete was diagnosed with a 1cm by 1cm thick rotator cuff tear, as well as a decompression release of the suprascapular nerve supplying the rotator cuff (which is rarely seen in athletics).  He ultimately needed surgery and thankfully had a great base of strength due to the aquatic therapy sessions throughout the preseason and regular season. Following surgery, the proper progression of rehabilitation was determined through an integrated approach and consultations with athletic trainers, physical therapists, and the surgeon. Contraindications included no active range of motion (AROM) 0-3 weeks, no internal rotation (IR) 4-6 weeks, with full ROM work starting at week 10. The most challenging restriction was the avoidance of any distraction of the arm, e.g. holding a dumbbell in the hand against gravity.

Lippman was able to work around these limitations using their aquatic therapy pool. With the physician’s approval, the early underwater range of motion allowed the athlete to begin motion sooner than the protocol instructed. Lippman had the athlete begin underwater therapy at about 2 weeks post-op. This prevented the difficult range of motion restrictions often seen in invasive shoulder surgeries.

The athlete began running on the underwater treadmill in the HydroWorx pool at 5 weeks post-op and progressed to sprinting against the jets over a three week period. The ability to run in a reduced gravity environment offered a way to implement sprint work roughly 4 weeks sooner than expected!

A common residual complication associated with rotator cuff surgery in throwers is the development of medial elbow issues from the implementation of an aggressive throwing program before the rotator cuff is at full functional strength. The athlete avoided this problem and has not had any elbow issues due to the ability to start rotator cuff strength and endurance exercise early, more often, and with better technique because of the utilization of the therapy pool.

At the time of physician’s final follow up, (approximately 6 months post op.) his rotator cuff strength was equal bilaterally (5/5) in all manual muscle tests. He was able to demonstrate full strength of the rotator cuff. Today, the athlete continues to have success on the baseball field with minimal shoulder soreness, while continuing therapy pool workouts once or twice a week in order to maintain throwing strength.

Watch some of the pool protocol below: