How One Facility Uses Water to Prevent ACL Injuries

An article published in July 2007, “Prevention of anterior cruciate ligament injury in the female athlete,” written by Holly Jacinda Silvers and Bert R Mandelbaum, discusses in detail the importance of developing a PEP (Prevention Exercise Program) with athletes, specifically females.

Over two thirds (70%) of all reported ACL injuries are non‐contact in origin. Some causes of non‐contact ACL injury in field/court sports commonly include the following: 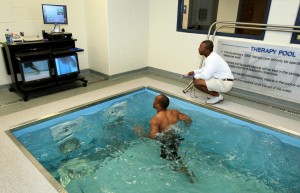 Therefore, with everything considered above, a prevention program emphasizes teaching athletes the proper landing techniques. The techniques include, landing softly on the forefoot and rolling back to the rear-foot, engaging knee and hip flexion on landing and with lateral (cutting) maneuvers, avoiding excessive strain on the knee.

Hill cannot emphasize enough the importance of developing an injury prevention program for ACL injuries, especially for athletes. One of the ways he does this at his facility is with the use of their aquatic therapy pool combined with land based exercises. Using the aquatic therapy pool eliminates the pressure experienced in the joints when starting initial jumps and landings. The pool also creates a pain-free environment suitable for any and all exercises. In the water, the Physical Therapist or Athletic Trainer can teach proper soft landing techniques because of water’s buoyancy and unweighting properties on the individual. The PT can also use the underwater video monitoring system to see if their patients’ knees are in the correct alignment when jumping and landing underwater. The other important feature is the patient is totally involved because they can view their legs and landing techniques as well.  The patient does not have to look down at their knees, rather with the HydroWorx underwater camera capabilities, they can view their gait and form right in from of them. This allows for them to maintain proper posture and head position as if they were on a playing field. This biofeedback of viewing themselves and their landing is key to excelling them in a quick progression in rehab.

Hill also says that the natural resistance created by water helps individuals improve their overall balance. Additionally, Hill tells us that the underwater treadmill reduces any joint or muscle strain caused from training. At NovaCare Rehabilitation, Hill and other PT’s have created an entire program focused on ACL prevention where they use the HydroWorx therapy and exercise combined with land exercises. Perfecting certain movements underwater, such as landing, twisting and jumping decreases the chance for the athlete to injure themselves on land performing those same movements. Many of the injury prevention exercises are started in the HydroWorx pool from the modified PEP program listed below and then progressed to the full program when ready to aid in ACL prevention in the future.

This Thursday, July 11, learn from one Athletic Trainer- LIVE, how he utilized water and land for an ACL Rehabilitation. Eric Sugarman, Head Athletic Trainer for Minnesota Vikings, will be presenting a free webinar on July 11th discussing the rehabilitation of NFL MVP, Adrian Peterson. In the webinar, “From ACL/MCL Reconstruction to the NFL MVP- A Case Report”, attendees will learn: