Get Creative! If It’s Effective On Land, You’ll Get Results In Water!

In a recent webinar, “Innovative Techniques for Multidisciplinary Aquatic Therapy,” Debi Tyler, OTR/L, Director of Rehabilitation at Cedar Village Retirement Community located in Mason, Ohio, discussed innovative ways to combine treatment objectives of occupational therapy, physical therapy and speech therapy in the water. With 30 years of experience, she noticed that patients often need the support of more than one specialist in the water and outcomes can be improved exponentially by addressing discipline specific tasks simultaneously. 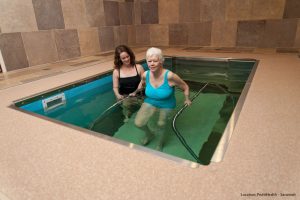 Debi and her team opened their aquatic center in October 2014 and were excited to offer patients the benefits of aquatic therapy over traditional land-based therapy. By using the HydroWorx 1200 Series, they offered the natural properties of water to patients: buoyancy, neutral warmth, hydrostatic pressure, vasodilation, strengthening with active movement, sensory properties and endorphin production. Debi wanted to offer even more to her patients – she wanted to be creative by doing more than one activity at a time in the water. She did this by co-treating with another discipline, such as occupational therapy or speech therapy, which can help to vary task performance while the patient is rehabbing.

During this webinar, Debi discusses how to take full advantage of the features of a HydroWorx pool such as the size of the pool, variable depth of the floor and resistance jets and offers ideas on how to implement therapy with those benefits. Debi displays the benefits by sharing a case study of a 66-year-old male and his progress using multidisciplinary aquatic therapy.

Don, a 66-year-old, retired aeronautical engineer, experienced an intracerebral hemorrhage in July 2016 with right-sided hemiplegia and global aphasia. His left basil ganglia, frontal and parietal lobes were affected and he presented with right-sided weakness. He began his rehabilitation at Cedar Village in August by performing two sessions in water and five sessions on land. Don was supported not only by the team at Cedar Village but his wife and three sons during his rehabilitation.

When Don began his rehabilitation, he was experiencing a lot of challenges such as:

Debi shared Don’s progress through demonstrational videos during the webinar. One shows a physical therapist and occupational therapist in the pool with Don and a speech therapist along the edge. By multi-tasking in the water, it tied cognitive tasks with motor tasks. For instance, the speech therapist interacted with Don by asking him to grasp objects and state what the objects were. Like in a grocery store, Don picks up the identified item and goes to the therapist and pays for the object. The therapist can give Don change back and sometimes, purposefully give him the wrong amount to challenge him.

In this case study, progress was largely attributed to early performance of more challenging tasks in a safe aquatic environment. The patient was enthusiastic and participated to the point of fatigue most days. The outcomes for Don were tremendous thanks, in part to, using aquatic therapy in his treatment plan:

Don’s story is a testament that patients love aquatic therapy because they’re achieving goals they never thought they could and are having fun.