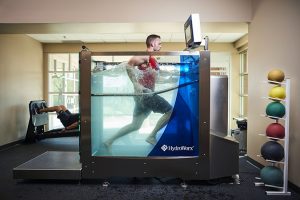 As with many sports, aquatic therapy and its prowess as a game-changing modality has influenced world-class track & field athletes.

Underwater treadmill training is trusted across running circles from professional running teams, such as the Oregon Project, to college track and field teams, like Liberty University, to recreational runners needing a low-impact alternative to high mileage. While it can be used as a rehabilitation tool after injury, it is often used as an additional training tool for healthy runners.

Why do water and running mix so well? Alberto Salazar, coach of the Oregon Project, explains this thoroughly in the book, “Underwater Treadmill Running.” Here are a few noteworthy nuggets:

“Even if I’m sore or injured from running outdoors, I can jump in the pool and run without an issue. Underwater treadmill running has transformed me as an elite athlete.” – Galen Rupp, Olympian and USATF record holder

The late Dr. Dennis Dolny wrote in 2012, “Who could have imagined a generation ago that we would discover a fitness tool that mimicked the advantages of land-based running without burdening the body?”