Middletown, Pa. – The international sport and ultra-popular pastime of professional football (known as soccer in America) recently became even more exciting with the opening of the expansive St Georges Park National Football Centre.  The 300+ acre facility, located in Burton upon Trent, Staffordshire, England, is set to offer professional footballers advanced training techniques, including hydrotherapy training and rehabilitation in a HydroWorx pool with underwater treadmill.

As noted by the Chelsea Football Club Medical Department when asked why they chose the HydroWorx unit as part of their facility:

“Aquatic therapy is an essential part of our daily player management at Chelsea Football Club. All players who sustain an injury move through water based therapy as a part of their progression, and the HydroWorx 2000 device is an essential part of this progression. The HydroWorx allows us to introduce high quality, functional multi-directional movement and conditioning work significantly earlier than we could normally introduce on land, which for us results in earlier return to training and playing. We also use the HydroWorx as part of our recovery system for fit players, the combination of functional movement and the properties of water being an ideal combination in contributing to optimal recovery.”

The HydroWorx pool installed at St Georges’ uses the same technology to train elite footballers as has already been used by players from Aston Villa F.C., Manchester United F.C. and Chelsea F.C.  Its state-of-the-art design includes a moveable floor, an 8’x12’ underwater treadmill, resistance jet technology, and computer and camera systems.  By harnessing water’s natural powers, the HydroWorx unit allows football professionals to safely – and effectively – cross-train for games, and recover from injuries. 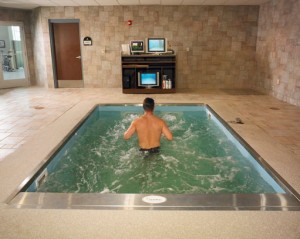 “The St Georges project will take the Football Association to new levels of performance,” says Anson Flake, CEO and co-founder, HydroWorx.  “The facility has been designed to enable individuals and teams to benefit from the newest technological advances, such as their HydroWorx 2000 Series pool.  We are honored to be a part of this revolutionary centre.”
St Georges, designed by the Red Box Design Group, was formally opened by the Duke and Duchess of Cambridge.  Along with its role as the coaching and development base for all Football Association teams, its amenities are available for hire by other sports teams’ managers, players, trainers, coaches and administrators, as well as private organizations.