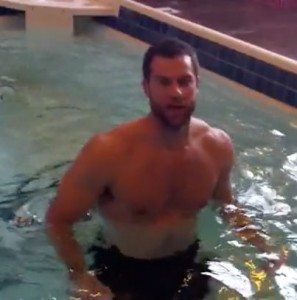 According to the American Academy of Orthopaedic Surgeons, the anterior cruciate ligament (ACL) is one of the most commonly injured ligaments of the knee. The incidence of ACL injuries is currently estimated at approximately 200,000 annually, with 100,000 ACL reconstructions performed each year. We recently learned of a case of someone opting out of surgery for his torn ACL.

This case is unique in that the patient is also the physical therapist. Adam Wolf, PT, DPT at St. Francis Rehab and Sports Medicine at the ACCUA clinic also had two previous ACL reconstructions on the opposite knee. After the diagnosis of a partial ACL and PCL tear, he opted not to have surgery this time and continued with his own rehabilitation and strengthening program, which included aquatic therapy.

He began using the pool the day after the injury once a fracture had been ruled out and prior to a formal diagnosis. Regardless of diagnosis, whether surgical or non-surgical Adam felt it would be to his advantage to keep the knee as strong and mobile as possible while decreasing the swelling which occurred in the first 12 hours following injury. Treatments began with an emphasis on normal function until a diagnosis and surgical plan was made. He noticed immediate improvements from using the pool, including decreased swelling, increased flexion and extension of the knee, normalized gait pattern and confidence transferring weight to the affected lower extremity when on land.

Once the diagnosis of ACL and PCL tear had been made by a PT, MD and MRI collectively, a decision was made to forgo reconstructive surgery and proceed with non-operative rehab. In addition to aquatic therapy, closed kinetic chain land therapy was initiated as well. Once pain and swelling were eliminated, ROM was restored and closed kinetic chain strength was comparable to the contra lateral knee, running and jumping were initiated in the pool. These activities were then brought to the land to progress rehab activities in a normal weight bearing environment.

Having had two previous ACL reconstructions on his left knee, Adam was able to make comparisons to his most recent right knee injury throughout his rehab. Comparing his progress to his previous ACL reconstructions, Adam noted that ROM was fully restored, gait deviations were eliminated and pain was eliminated within one week of use of the pool. After previous injuries, this took approximately two to three weeks to accomplish. Another advantage of using the pool is that he was able to jog and run to tolerance within two weeks of the injury.

“The HydroWorx pool allowed me to progress much quicker than land based therapies alone for treatment of ACL and PCL partial tears.”

Throughout Adam’s rehab in the aquatic therapy pool, he was able to use different features of the pool including:

Watch Adam review his case history and take you through each stage of his pool program to avoid surgery on his partial ACL and PCL tear: