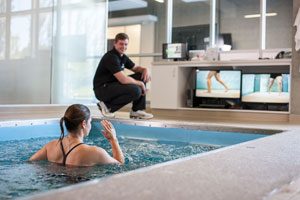 Winter athletes do some crazy stuff, right? One hundred and eighty feet of slopestyle air, freeriding 96 MPH down an icy mountain, and g-forces so strong you can’t raise your head? Broken wrists. Broken legs. Smashed ribs. That’s pretty much the norm. Yet top winter athletes somehow find the moxie to rehab, then hop back on their gear of choice and try again.

Helping in this critical rehab effort—you might even say a hotbed for Canada’s top athlete rehab—is Fortius Sport and Health in Burnaby, British Columbia. The $61 million facility includes a HydroWorx 2000 Series pool with an underwater treadmill, the first in western Canada.

Fortius is inspired by the notion that sport and exercise medicine can play a leadership role not only in injury prevention and injury management, but preventative approaches to true health care. It’s an athlete development centre and was founded by leading names in the sports and exercise medicine world, who work together as a fully integrated team. The vision from the beginning was to build a comprehensive athlete development, sport medicine, science and training centre that would offer everything athletes and other individuals needed to optimize their performance, including the top of the line aquatic modality.

Mark McMorris, who suffered a horrendous snowboarding accident in the British Columbia back country in March 2017, did some of his rehabilitation at Fortius. He suffered a broken jaw and arm, ruptured spleen, collapsed lung, rib fractures, and pelvic fracture. After 10 days in the ICU, McMorris began to improve. His inspiring comeback, as documented on CBC Sports.ca, included using the HydroWorx 2000 series pool during the early stages of rehab.

With under a year before the big games, McMorris waited only weeks before beginning physio work in four-week intervals. Underwater treadmill work, mobility drills, soft tissue joint work were top treatment priorities. McMorris’ physio and family friend, Damien Moroney, was surprised at his rapid recovery, considering his barrage of injuries.

McMorris’ brought home a bronze in snowboarding Slopestyle in February, and defended his gold at the Burton US Open last week.

Tatum Monod, Freeskier Magazine’s 2017 Skier of the Year, suffered a broken femur, torn ACL, partially torn MCL, bucket handle tear to her meniscus and several bone bruises from an April 2017 fall in Haines Junction, Alaska. On June 1 Monod was thrilled to announce on Instagram, “I’m walking!” as she entered Fortius’ HydroWorx 2000 pool for the first time.  The natural properties of water reduced swelling and inflammation and the smooth gait training provided by the state-of-the-art underwater treadmill helped Monod heal faster.

Evidently, it will take more than falling off an Alaskan cliff to stop Tatum. And more than a barrage of breaks to keep Mark away from the slopes. And Fortius will continue to provide these determined athletes an unmatched quality of care.