Customer Spotlight & Tips for Keeping Hockey Players on the Ice

We all know that ice hockey is an intense sport. Hockey pucks fly up to 100 miles per hour and players can reach speeds of 30 miles per hour on skates. Players’ basic movements, stances and motions require a significant amount of twisting and turning, putting tremendous stress on various joints.  Although hockey players may be gliding while they skate, their bodies aren’t immune to the effects of gravity or momentum. That means two things: hockey players are playing hard and getting injured during the course of play. These injuries can keep them off the ice for minutes, to weeks depending on the severity of the injury. 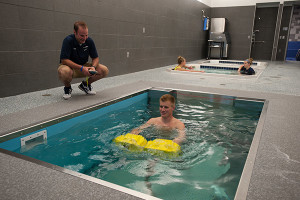 The majority of game and practice injuries in hockey occurred to the lower extremity. Knee injuries are the most common reported during hockey games, whereas pelvis and hip muscle strains were most common during practices. NATA states that player-to-player contact is the mechanism of injury about 50% of the time in games.

Though a hockey player could experience any type of injury, there are a few that are more common, including:

While injuries are always going to be a part of sports, there are some ways to reduce injuries. NATA recommends limiting the player-to-player contact in neutral zones, improvement of protective equipment (helmets, shoulder pads, etc.) and muscle specific conditioning programs.

The American Physical Therapy Association (APTA) has discovered that whether it is due to impact or overuse, the type of injury varies greatly. APTA recommends an exercise routine that includes a dynamic warm-up, cool down and overall core strengthening to prevent injuries to keep players on the ice:

Although it is commonly assumed that these routines will be done on land, there is a lot of value in using aquatics to reduce the impact on the body. Some of the range of motion exercises athletes do regularly make the most of water’s swell-reducing compression and natural resistance (both with and without the assistance of high-powered resistance jets. These exercises include:

Athletes tend to lean towards warm water therapy during injury progression because the buoyancy of the water, the hydrostatic pressure and warm water allow for increased range of motion. The goal for any coach or athletic trainer is solely to get the athletes back on the ice as quickly and safely as possible which is why utilizing aquatic therapy into rehab plans benefits the player and the entire team. 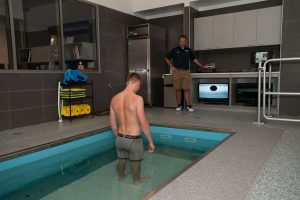 We are proud to have many hockey customers who see the advantages of HydroWorx aquatic therapy and conditioning. In October 2013, the Pegula Ice Arena, located in University Park on the campus of Penn State University (PSU), opened. In the past few years, the PSU hockey team has been challenged to get to the top of the drawing board. With hard work and determination, the Nittany Lions are currently ranked No. 1 in NCAA Division 1 Hockey.