HydroWorx and Hockey: A Pain- Free Way to Keep Players on the Ice

Hockey season is now in full swing, and that means two things: hockey players are playing hard and getting injured during the course of play. These injuries can keep them off the ice for minutes, to weeks depending on the severity of the injury.

HydroWorx technology has the ability to help many athletes get back to doing what they love sooner. 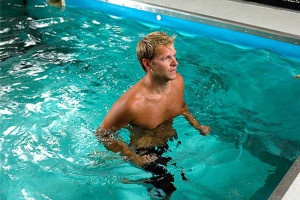 Though a hockey player could experience any type of injury, there are a few that are more prevalent, including:

There’s no question why these injuries occur in this sport. Hockey pucks fly at up to 100 miles per hour, and skaters can reach speeds of 30 miles per hour.  Contact is intense, fierce and expected.  Additionally, the basic movements, stances and motions involved in ice hockey require a significant amount of twisting and turning, putting tremendous stress on various joints.  Although hockey players may be gliding while they skate, their bodies aren’t immune to the effects of gravity or momentum.

Getting Hockey Players Back to Health

When injuries occur, trainers and coaches have to make quick decisions to get their players back as soon as they can.  For the more progressive high school, collegiate and professional hockey teams seeking the most advanced therapies available, this includes rehab in a warm water therapy pool.

Mark Poolman, ATC, University of North Dakota, is a firm believer that water’s natural properties of buoyancy and compression help hockey players recover faster.  He uses his facility’s HydroWorx pool with water set at a temperature in the low 90s to safely and painlessly get his program’s injured athletes back in gear.

One of his athletes, a hockey player with a second degree medial collateral ligament (knee) strain, was able to fully compete on the ice a mere two weeks after his injury.  The morning after the injury occurred, Poolman had the player in the pool going through rehab protocols.  As with most injured athletes, Poolman started the athlete’s rehabilitation by focusing on range of motion.  Once range of motion is established, strength is able to efficiently return.  The athlete would get into their HydroWorx pool two to three times per day, performing specific exercises under the watchful eye of Poolman.

Some of the range of motion exercises Poolman regularly uses make the most of water’s swell-reducing compression and natural resistance (both with and without the assistance of high-powered resistance jets.)  These exercises include:

Eventually, Poolman has hockey players in recovery mimic hockey positions and strides underwater, such as completing 45 degree angle foot rotations and getting into wide stances. He emphasizes the need for the players to engage their abs during all rehabilitative sessions to maximize the core muscles and stability which are so integral to ice hockey.  The end goal is to make sure that the player’s body is given the ability to heal itself with assistance from water therapy.

Making Hockey Better for Everyone

No fans want to see their favorite players out of the game for any length of time.  They want to be able to cheer for them when they score goals, make saves or make incredible plays.  When it comes to battling against persistent injuries among hockey players, there’s no doubt that aquatic therapy protocols can play a big role.  How ironic that a sport played on frozen water can be bolstered by therapy in a pool with water that’s been heated up!

Watch the full case study videos of the rehabilitation of the collegiate hockey player: