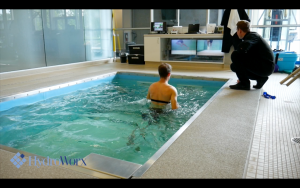 The Canadian Men’s Field Hockey Team (Red Caribou) was looking for a comeback this year after missing previous games. Despite dealing with massive funding cuts, the team persevered and made their run. They trained with Nick Held at Fortius Sport and Health Centre in Vancouver, BC and spent some time doing conditioning and recovery work in the HydroWorx 2000 Series, Thermal and PolarPlunge pools. Despite not making it to the finals, #15 ranked Canada was proud of their hard work that ended in a draw against the #5 ranked team, India.

The last thing that any national team wants to deal with heading into important competition is injuries, but when training is intense, things like hamstring strains, muscle soreness and other injuries are inevitable. The key is having the athletic training staff, equipment and grit to persevere through the injuries and recover quickly.

One of their defenders, Ben Martin, strained his hamstring while in Malaysia earlier this summer with the Red Caribou. While at Fortius Sport and Health Centre with only 100 days to go until game time, Martin was able to get onto the underwater treadmill for some conditioning and training work, specifically focused on his hamstring strain. This gave him the opportunity to push his running more than he could on land in order to quickly increase his cardiovascular conditioning in leading up to very important competition with important competition nearing.

Martin was excited to use the underwater treadmill to get him back to training with his team faster, without the risk of re-aggravating his hamstring strain. He also felt that the underwater treadmill gave him the opportunity to see how fast he could go without pain, by using the buoyancy of the water to manage his gait pattern at fast speeds on the treadmill.

Martin was able to recover in time to represent Canada in their comeback year.