Nick Held was one of many athletic trainers that participated as a presenter for our Spring Sports Medicine CEU program. Nick Held is the Research and Development Manager at HydraAthletics  (Ontario, Canada) and he has worked on research projects regarding aquatic treadmill training with several of the athletes that he treats. Nick started working with a wide variety of patients with the goal of ensuring that the “general public [is] receiving the best care possible”. When he started working with aquatic therapy he had a lot of questions, so he tried to find the answers in literature. He quickly found out that the literature was scarce, and the findings were very inconsistent, so he decided to create research studies that would answer these questions. 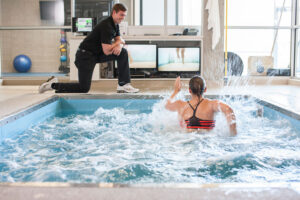 Nick presented on three aspects of research including:

When designing his studies, he examined several factors listed below:

Nick emphasized that there are many alterations that occur during water based exercise which can influence the response and physical adaptation of an athlete. Some common alterations include water depth, treadmill speed, and jet resistance. Some of the less common alterations that can occur include running position and water temperature. For more in-depth information and explanations click here to watch the recording of the Nick’s presentation.