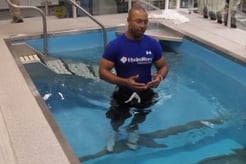 This webinar was part of the Spring Sports Medicine CEU Program that HydroWorx offered. In this webinar you will learn:

Grant is highly respected for his leadership in student-athlete care and was named the first-ever executive chair of the NATA’s (national Athletic Trainers Association) Intercollegiate Council for Sports Medicine (CSM) in 2017.

Grant has 18 years of experience as an NCAA Division I athletic trainer. He joins the Demon Deacons after spending 13 years at the University of Kansas where he served as the head football athletic trainer for 12 years and the Director of Sports Medicine for the past 11 years.

He began his training career with the rookie league affiliate of the Boston Red Sox before becoming the head athletic trainer at Missouri Valley College in Marshall, Missouri. Grant spent five years as the head trainer for the Oklahoma State men’s basketball team including two seasons as the Cowboys’ strength and conditioning coach.

In his career, Murphy has been involved with numerous teams that achieved postseason success. While at OSU the Cowboys basketball team advanced to the Final Four and made a Sweet 16 appearance. He has been a part of back-to-back bowl games wins with Kansas football (BCS Orange Bowl and the Insight Bowl).

In addition to his athletic training work at OSU and Kansas, Grant has worked with the television show ‘The Biggest Loser,’ designing workout programs for its contestants, specifically regimens affiliated with HydroWorx. Additionally, Grant has spent time working with the Chelsea Football Club, Manchester United, Manchester City, Tottenham, and West Brom of the English Premiere League and Major League Baseball’s Washington Nationals, Navy SEALs, and several orthopedic and physical therapy clinics around the country. Grant is responsible for a chapter in the book ‘The Use of Aquatics in Orthopedic and Sports Medicine Rehabilitation and Physical Conditioning.

A native of St. Louis, Missouri, Grant is married to the former Amy Dana, who is also a certified athletic trainer. The couple has two sons, Jackson and Gavin.