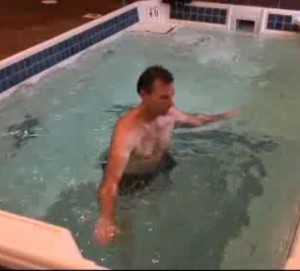 Dave Cummings was a talented tri-athlete, competing in about 5 triathlons every year and usually finishing top three in his age group. One cold February day, when Dave was training on his bicycle outside, he was struck by a vehicle that ran a stop sign.

The driver was on a cell phone, and believing that they had simply hit some brush, continued driving, dragging and contorting Dave beneath the car. Dave’s femur was instantly broken in three places and the compound fracture severed his femoral artery and vein causing him to lose 68 percent of his blood. In addition, his collarbone, 3 ribs, and 2 vertebrae in his back were broken, his shoulder separated, and the disc between T12 and L1 in his spine was crushed. Dave remained conscious and responsive throughout the accident.

After the injury, Dave endured 4 surgeries. Amidst the pain and devastation to his body Dave’s desire to train and exercise could not be quenched. Despite his newfound physical limitations, Dave sought out aqua therapy options upon the bequest of a friend. He soon found a HydroWorx pool and began training at ACCUA, driving 52 miles through traffic 2-3 times a week in order to use the pool.

As a tri-athlete Dave had to shoulder the challenge of re-establishing his range of motion, regaining lost strength, and rehabbing his now curved spine. The HydroWorx aquatic therapy pool with the underwater treadmill helped Dave get back into motion, begin training and exercising once again.

Dave’s aquatherapy sessions were comprised of the following exercises: •

Listen to Dave as he tells his amazing story, and watch as he once again returns to exercise with the aid and natural buoyancy of water.