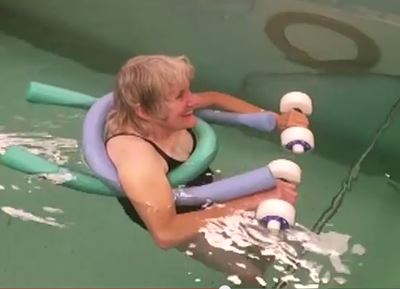 Patients with cerebral palsy have a number of neurological disorders that affect their body movements and muscle coordination. Although this disorder doesn’t necessarily worsen over time, the severity of a patient’s symptoms are varied. Mary, a patient with cerebral palsy at Pieters Family Life Center, suffered from an injury that resulted in bursitis. Bursitis starts with a small bursa which is a fluid-filled sac that is usually formed between muscles and joints as a cushion.

Once Mary found herself struggling to perform her daily tasks she knew she had to do something. Mary started going to Pieters Family Life Center to use the HydroWorx Pool to strengthen and stretch her muscles and joints.

Mary has been using water therapy for almost a year and half now. Since she first began, she has seen significant improvement in the way she can hold herself up and begin walking on the treadmill.

Some of the protocols she uses in the HydroWorx pool include:

Throughout the workout, the warm water allows for increased flexibility while loosening muscles and joints. By watching the protocol video below you can see a significant change in Mary’s posture from the beginning of her therapy to the end.