The Secrets to a Thriving Aquatic Therapy Practice? Teamwork and Planning

When Brian Howells, Director of Rehab Services at Via Christi Health in Manhattan, Kansas, talks about his organization’s aquatic therapy journey, he’s filled with excitement. After just a few years, he and his staff members have built a successful resource for the community and are reaping the clinical and financial benefits at their practice which features a HydroWorx 500 Series and sees up to 14 patients per day.

What’s their secret? For Howells, it’s clearly the planning and teamwork they implemented from the get-go. Learn more by watching the webinar. 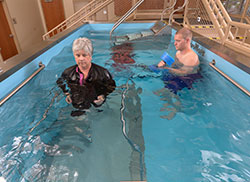 During a recent webinar, “Creating a Successful Aquatic Therapy Program Through Teamwork,” Howells generously devoted his time to discussing how he built his practice. Some of the more valuable tidbits from the online event included these pieces of advice so integral to making hydrotherapy beneficial for all involved:

Do you want to find out more from the humble, engaging Howells, including what he thinks his team could have done better? View the webinar on-demand today.