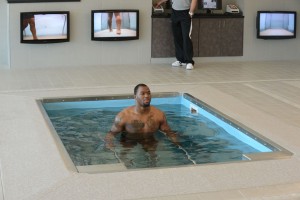 A syndesmotic ankle injury is typically referred to as a high ankle sprain and can often be resolved without surgery and focused rehabilitation. Unfortunately, sometimes the rehab is a bit more complicated. In the case that Brian presented, multiple similar injuries made this situation slightly more complex.

This 21-year-old sophomore offensive center, who had no history of ankle injury, sustained a combination low and high ankle sprain during the second to last drive of the last game of the season. After sustaining two more similar injuries in the following months the decision was made to undergo surgery to stabilize the tibia and fibula. The surgeon performed debridement and a fixation with a buttress and tight rope.

After 4 weeks non-weight-bearing and two weeks doing physical therapy at home, he returned to campus at week 6 and began rehabilitation with Brian. At this point, he was full weight-bearing in the walking cast and was ready to begin strengthening in all planes. The athlete had used the pool after a prior back surgery and really liked it, so it was decided, with the support of his doctor, to do most of his rehab in the water.

Since the athlete enjoyed the hydrotherapy so much, he would sometimes spend an hour and 20 minutes in the pool.

At 12 weeks post-op, he had new X-rays and was cleared to begin running on land. He noticed when he started jogging that, since he had done so much conditioning in the pool, it was easier to get back to full speed. He had no ankle issues throughout the following season.

Brian included details and great videos of each of the aquatic exercises used in each phase of the syndesmotic ankle rehabilitation and advantages of using water. Brian Lund has made great use of the hydrotherapy capabilities at the University of Wisconsin in Madison, WI.

Following the informative presentation, Brian answered several questions from attendees. A few of them are below:

When you were doing the cutting and positional drills, was the underwater treadmill on?

How long was a standard rehab session including dry land and pool?

At any point during rehab, were there any setbacks that required the athlete to rest or reduce rehab temporarily?

What was the athlete’s feedback from using pool?

Do you normally see a difference in return to play time for aquatic therapy vs land-only therapy?