A Behind-The-Scenes Look at an Athlete’s Road to Recovery.

Both the men’s and women’s NCAA Final Four tournament is around the corner, professional basketball finals are on their way, professional baseball’s opening day was just this weekend and many spring sports are beginning their seasons. It is exciting to hear all of the success stories of teams and athletes during this time. Unfortunately, we […]

Take A Swing With Aquatic Therapy

If you like to golf at all, then you know that golf season is upon us. Athletes that are gearing up for competition are already in full swing preparing and training for their season. In order for a golfer to perform to the best of their ability, maintaining fitness levels and perfecting their golf mechanics are some […]

3 Guidelines for Introducing Aquatics to Your Geriatric Patients

The following blog post has been summarized from the recent article published in the February 2014 issue of Advance for Physical Therapy & Rehab Medicine, “Tangible Outcomes, Intangible Results,” by Nick Drey, MS. Nick Drey is the Wellness Director at Walnut Ridge at Clive Senior Community in Clive, IA, which is also home to a […]

5 Strategies for Creating a Competitive Advantage for Your Clinic 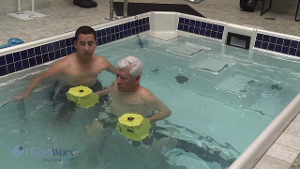 There are most likely at least a few physical therapy clinics in your  area, which means you are always working to gain a competitive advantage. In today’s changing healthcare environment and with an onset of baby boomers needing the majority of rehabilitation, the stakes are even higher. Baby boomers are not like the generation before […]

Join us in person or watch our upcoming educational event online, Progression of Running Drills Using the Underwater Treadmill. Our presenter, Anthony Testa, Med, ATC, CSCS, Director of Sports Medicine at Seton Hall University, will be presenting live from the HydroWorx 500 Series pool at Seton Hall University on March 27, 2014 from 3:00pm to 4:00pm EDT. […]

For any athlete that has been injured, it is a dream to come back from that devastating injury and have a successful season. For Adrian Peterson, his recovery was a fairy tale. After  Peterson tore his ACL at the end of the 2011 season, people began to wonder if he would ever be the same […]

HydroWorx is Headed to Milan, Italy for an International Sports Medicine Event

HydroWorx will be attending and exhibiting at the International Conference on Sports Rehabilitation and Traumatology, March 22nd and 23rd. This year’s theme and topic is Football Medicine Strategies for Joint & Ligament Injuries.  This event was held the past two years in London and now returns to Italy, the home of the event organizers, Isokinetic Medical Group. […]

Upcoming Free Webinar: The Changing Healthcare Environment: Is There a Role for Aquatic Therapy?

Join us for a free webinar on the changing healthcare environment and how aquatic therapy fits! On March 18th at 1:00pm EDT, Ted Yanchuleff will be presenting “The Changing Healthcare Environment: Is There aRole for Aquatic Therapy?”  The webinar will attempt to address some of the implications on an aquatic therapy program associated with the […]

4 Lessons Learned From an Aging Athlete

The following is a post written by, Mike Studer, PT, MHS, NCS, CEEAA, and President and co-owner of Northwest Rehabilitation Associates, in Oregon. In 2013, I posted a series of blogs about a local masters-level runner that had aspirations of running 13 separate half marathons (13.1 miles).  If you recall, he achieved this goal (plus 2 marathons), […]