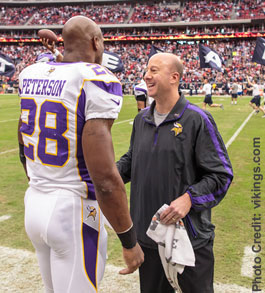 For any athlete that has been injured, it is a dream to come back from that devastating injury and have a successful season. For Adrian Peterson, his recovery was a fairy tale. After  Peterson tore his ACL at the end of the 2011 season, people began to wonder if he would ever be the same again. Eric Sugarman, Head Athletic Trainer, had the distinct job of working with him daily to get him back to the playing field.

Sugarman identifies three things that need to be taken into consideration to allow for an athlete to be comfortable immediately. It is important to make sure to control the swelling of the knee, restore the athlete’s of his range of motion and prepare him and his body for surgery.

In the early stages after surgery, aquatic therapy can be extremely beneficial. Stephen LaPlante, Physical Therapist at the Andrew Institute lists some of the benefits of using a HydroWorx pool.

“As soon as we were comfortable with Adrian using the HydroWorx pool we got him in there. We know that water therapy is very beneficial and the ability for Adrian to move in the water with very limited resistance was very, very helpful.”

When Peterson began water therapy just 2.5 weeks after surgery he was able to begin walking at a speed of 2-2.5 mph without any pain or discomfort. This is something he would not have been able to do on land.

Along with walking on the underwater treadmill, the HydroWorx Pool allows an athlete to progress to other activities in the water. From running sprints to doing side shuffles and backward peddles, an athlete can do movements in the water that their body wouldn’t allow them to do on land with less risk. Not only can they benefit from the underwater treadmill, but by using the HydroWorx massage hose, they can reduce scar tissue in the knee.

Watch The Inside Story of Adrian Peterson’s Rehabilitation: